I just have to let everyone know that it has eventually happened; after a month’s absence, the Xakubasa Pride – with their two white lion sub-adult lionesses – returned to Motswari!
We had been informed that the pride were on a nearby property for the last two days, and that last night that moved south-east towards the Timbavati.  Grant went on an early morning drive and found some lion tracks on the airstrip near camp, so asked the trackers to go follow up, half expecting it to be the Jacaranda Pride.
It soon became clear that this was not for the Jacaranda lionesses, but rather for the White Lions, and after a couple of hours, Marka – together with our tracking team – managed to locate the Xakubasa Pride!  They were still on the move late into the morning, and moved through the thicker eastern section before eventually coming to rest on the northern bank of the Sohebele Riverbed in our eastern section.
We went out after breakfast to have a look, but the visual was rather poor from the opposite bank of the river as the pride lay in the shade of a mopane thicket (glad to see that they haven’t changed their ways!!!.....or maybe it is just because I am back, because they always seem to perform for the other guides and Leanne and Will from the film crew?)!  As we weren’t on a proper game drive, we didn’t attempt to go closer and just watched them resting from a distance. 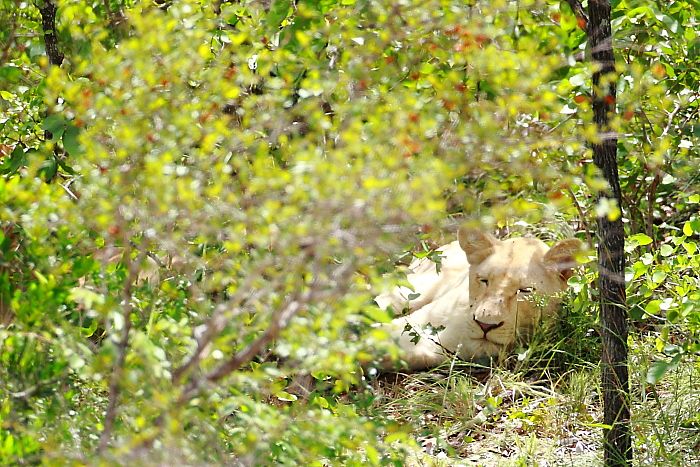 Grant is heading out this afternoon, and will hopefully be able to get a better visual for his guests, but what a treat they are in for to see these amazing lions in their natural habitat!  I sincerely hope that they stick around for the next few days, weeks and months!
at 12:04