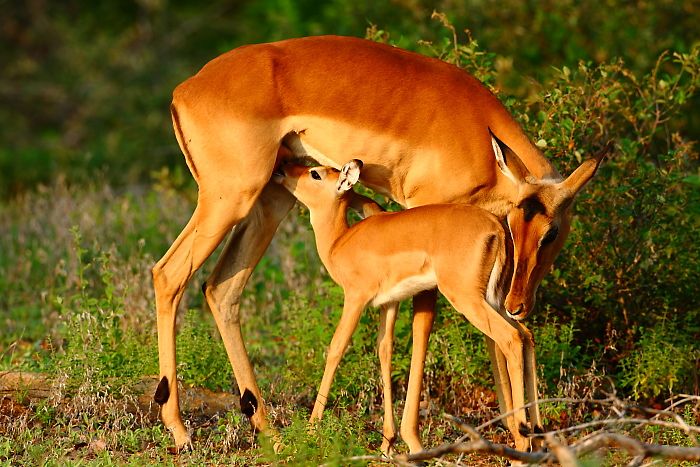 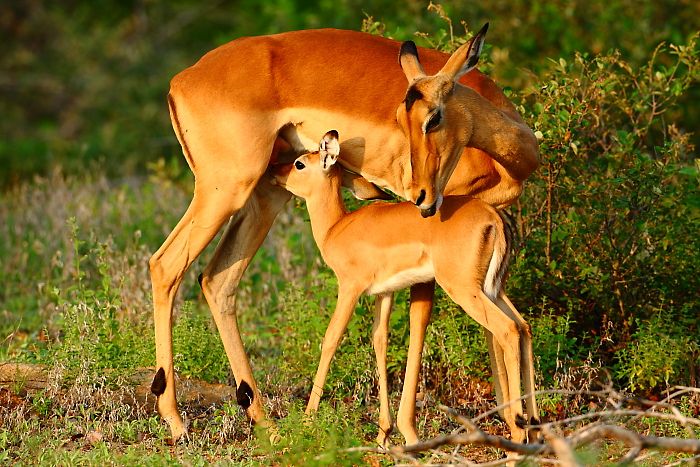 The morning started with tracks for 2 lionesses being called in at Voel Dam, and then tracks for the Mahlathini males seemed to also pop up.  We assumed it was tracks for the Jacaranda lions in the north-western corner of the reserve, so when Johannes found tracks for some lions near the lodge, we were a bit confused.  In the meantime, Giyani had also picked up tracks for two of the Mahlathini male lions near Java Camp, so I decided to go assist him and track them down.  As I was approaching the area where he had last seen the tracks, Petros and Difference stopped me to point out more tracks for lions on the Java Airstrip, but we quickly realised that these tracks were not for the Mahlathini males, but rather for the white lions!  They wasted no time in following the tracks off into the bush while I carried on with the drive.
While they were tracking the white lions, Johannes managed to track down the 4 Jacaranda Lions with a fresh buffalo kill – one of the young buffalos whose fate we had debated about just yesterday!  These lions had dragged the kill under a thick terminalia bush not all that far from our airstrip and were feeding while the vultures started to gather.
Just prior to Johannes finding this, another guide from a neighbouring lodge had made sense of the tracks near Voel Dam and found one of the Mahlathini male lions mating with one of the Timbavati lionesses!  Elliot was the only guide who went to see them in the morning, but not after he had made himself very popular by finding the first white rhino we have seen for almost 2 weeks!  Nhlangula male rhino had eventually returned after his leave of absence and spent the morning peacefully grazing towards Sweetwater Pan from Nkombi Pan, allowing all of our guests to see him.
I was contemplating going to see the mating lions when I got word from our trackers, who had now been joined by Jackie, that they had eventually found the white lions, and wasted no time in heading over to see them.  True to their nature, they had chose to rest off the heat of the day in a small mopane thicket and were not very active, but it was great to see them again and equally rewarding considering the work our trackers had put in – good work gentleman!  Oh yes, and despite finding three different groups of lions from 4 prides, there were still 2 Mahlathini males missing in action, but the worrying thing is that they are in the same block that the white lions are in – luckily it is a big block of land, and we hope for the sake of the white lions that they do not cross paths.
﻿
﻿The hard work carried out in the morning set up the afternoon drive very nicely, and we all got to make our way towards different sightings.  Grant, Elliot, Johannes and Godfrey went down south to the Xakubasa Pride who were far more active and actually spent most of the afternoon split between moving and resting, eventually being left head towards Hide Dam, so we are hoping that they will still be on the property tomorrow.


I tried to go and relocate on the mating lions near Voel Dam, but had no luck even finding any tracks that we could follow up on, and after driving around the area for some time, in a light drizzle, I eventually gave up and moved back east to where Herald had a wonderful breeding herd of elephant that were feeding in a clearing.  The herd slowly made their way towards Klipdrift Crossing and drank before swimming across the river, month-old babies too, to the opposite bank where we were parked!  It was a such a fantastic sighting that we hardly even noticed the rain had gotten heavier! 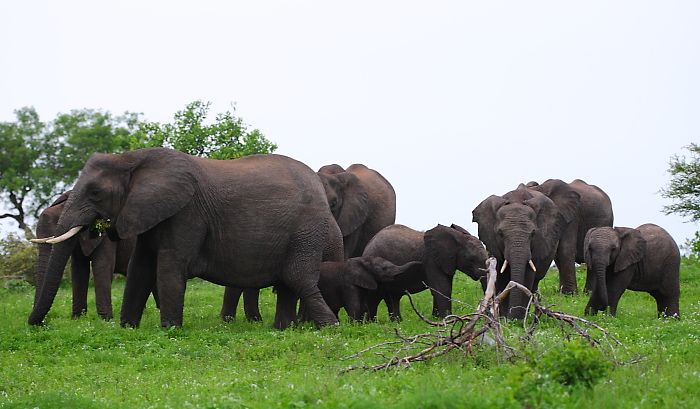 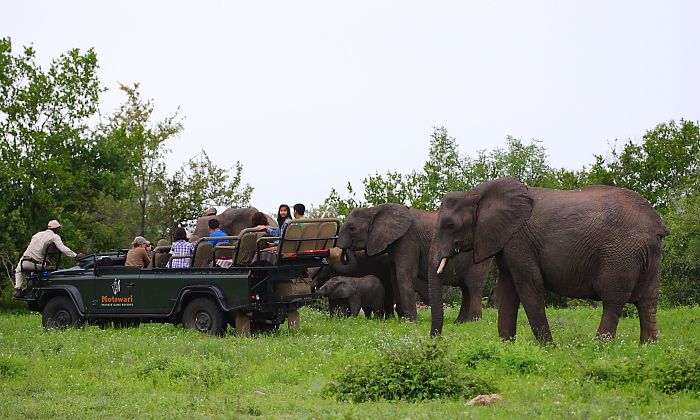 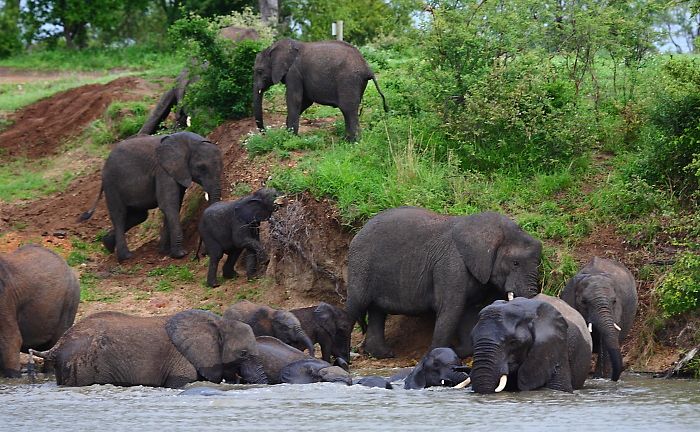 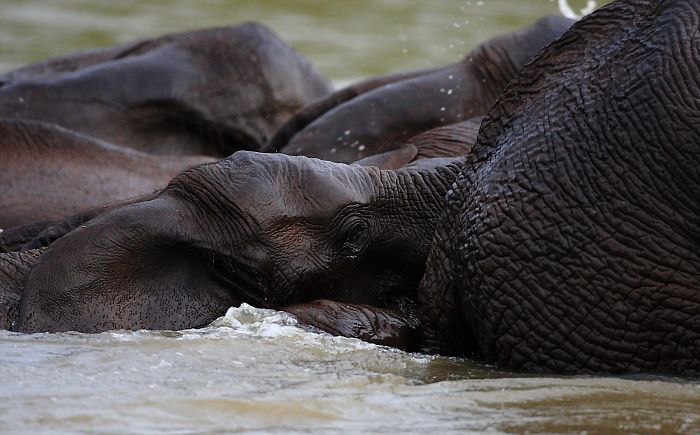 Herald and I, driving a group together, conferred with the guests if they would rather go see the white lions or the Jacaranda Pride and their kill, which they had not yet seen, and considering the weather, they opted for the latter as it was only 5 minutes from camp.  I had been out with Grant after breakfast to have a look, and found that the lions had dragged the carcass under a thick terminalia bush such that the visual was not particularly good.  I was thus delighted to find that the one young male had dragged the remains out into the open a bit more and was feeding nicely.  Herald joined me and after some time I headed off back towards camp, only to find a pack of hyenas running straight in the direction of the lions.  We immediately returned to find the pack had beaten us there, and got the attention of the lions.  We then spent the next 20-minutes watching the young male lion and the young lioness set about chasing the nine or 10 hyenas that were gathered in the area.  There was some great vocalisations and growling and made for a great African scene epitomising the relationship that exists between these eternal enemies!  With the rain still falling and with darkness set in, we headed back to camp for a nice warm shower, eager to see what surprises tomorrow has in store for us! (Sadly due to the rain and low light I didn’t take any photos – guess it’s another one for the memory bank!) 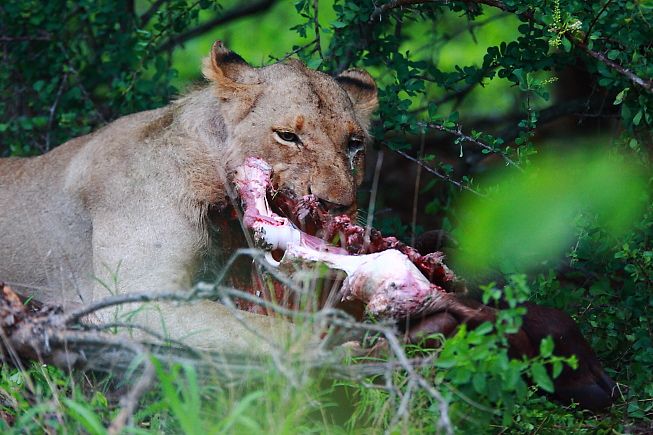