Photo of the Day
Morning Drive
(Chad, Godfrey and Herald)
1 x breeding herd of buffalo – Jaydee, Ndlovu Rd
Afternoon Drive
(Chad and Herald)
1 x leopard (Argyle Male) – Peru, Sohebele Dam Wall
1 x leopard (Unidentified male – possibly Machaton Male) – Peru, Sohebele Dam Wall
3 x elephant bulls – Motswari, Workshop Link
Daily Synopsis
As mentioned at the end of yesterday’s blog post, the rain was falling as we all went to bed, and did so for a couple of hours, dropping 11mm of precious liquid on the thirsty bushveld.  We headed out on a chilly morning and were informed that there had been some lions heard roaring in the direction of Mbali property, and so I made my way that side to see if we could have any luck.
While the rain might be a rejuvenating force for the grass and trees, it wasn’t having the same effect on the animals and we all had rather quiet mornings; that might have had to do with the fact that at about 8am, the rain started again, and didn’t stop until about 4pm, adding another 21mm to bring the day’s rainfall up to 32mm.
While we can’t complain about rain, it really could have waited just a bit longer to fall down on us!  We had found tracks for the Mahlathini male lions at Klipgat Crossing, and tracked them through Mbali, across Java and right towards a breeding herd of buffalo that I found resting on the hill on Ndlovu Rd, Jaydee.  My time was running out, but I left Petros to help Difference track them as I headed back to camp.  As the lion tracks were on top of the buffalo tracks, I was sure they were close...turns out they weren’t and more tracks were found heading to the east towards Western Cutline, and the trackers turned their attention to that area.  The rain was now coming down, and the trackers found where the lions had been hunting zebras on Java, but the rain was too much and washed the tracks away before they could locate the lions!  So while that was disappointing, it was still great to see that the Mahlathini’s didn’t spend too long off the property!
Besides the buffalo, I only saw a few kudu and impala; Godfrey’s mission of finding rhino and leopard was unsuccessful, but he did see zebra, giraffe and some other general game, as did Herald.
The wet afternoon didn’t hold much promise, but at least we knew that any tracks we saw would be fresh!  The rain soon died and we remained dry and searched the north for leopards.  Herald found fresh tracks for a female heading south from Argyle Dam, and concurrently I found tracks for a male leopard at Sohebele Dam.  While I was watching the hippos there, I was almost sure a leopard had walked past behind us as the francolins got a big fright, but despite checking, we found nothing.  At the dam wall we had slightly older tracks for a male leopard heading into the riverbed, and drove around to check if they came out, which they didn’t.  Knowing that it wasn’t wise to go tracking in the thick riverine vegetation, I had half decided to rather come check the area after dark and crossed the dam wall to the west when a stroke of luck saw us find Argyle Male leopard walking on the dam wall! 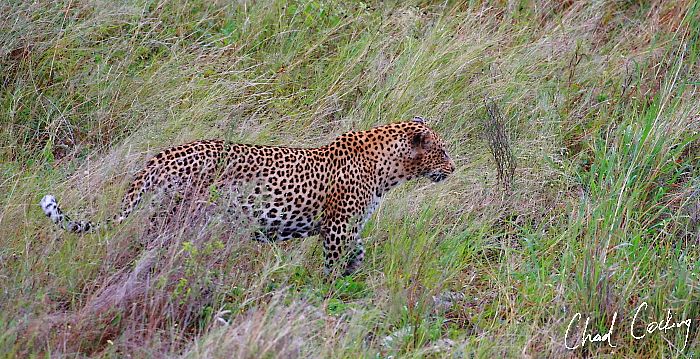 ﻿ ﻿He went down into the river and then back to the east and we followed him for a while as he made his way through some thickish bush.  The other station in the sighting said he had heard another leopard calling to the west of Sohebele Dam, and not wanting to lose Argyle Male before Herald and Johannes got to see him, I made way for them.


I decided to go and check for this other leopard, mainly to curb my interest as to who it could be.  It was the wrong choice!  We found him; that was not the problem.  The problem is now it is bugging me as to who he is!!!  We found him in almost the same spot as Argyle Male, and clearly aware of his presence as he was seemingly following the scent trail our dominant male had just left.  This unknown male was not a small leopard (so we immediately ruled out Vyeboom Dam and Gijima Males) – in fact he was pretty impressive himself and seemed to be a leopard entering his prime.

He was a little shy of the vehicle and moved off as we approached, but we kept our distance and he soon came onto the road and we followed him as he walked along it for a while before moving back down towards the riverbed and we left him not knowing who he was, and why Argyle Male had not bothered to go and sort him out when he heard him calling so close by!
Even upon returning to camp and checking my photos (I missed the shots when he was looking at us!), I am no closer to an answer.  While I can rule out Goya Rd Male, Iam stuck on Machaton Male; I think there is a fairly good chance it was him, but cannot be certain.  Either way, it’s great to see two large male leopards in the same area, and could lead to some interesting times in the near future!
Besides the leopards, it was a bit quiet; I did see duiker, impala, a big herd of waterbuck, genet and plenty of hippos – two large pods at Sohebele Dam and Mbali Dam, and then a hippo out of the water at Sohebele Dam on the way home, and a mother and a tiny baby out of the water at Argyle Dam!  Herald had a similar drive but he too saw a few elephant bulls near camp on his way back to the lodge.  The only other interesting sighting in the north was a report of Voel Dam female leopard being found by a guide from a neighbouring lodge near Hyena Pan, and by all accounts she was quite relaxed with the vehicles which is very good news!
﻿﻿﻿﻿﻿﻿﻿So that was our day; a cold and wet one (and gloomy, hence the lack of any good photos!), but tomorrow promises to be drier; I just hope the wind dies down so that the animals come out to play in the morning!
at 23:08