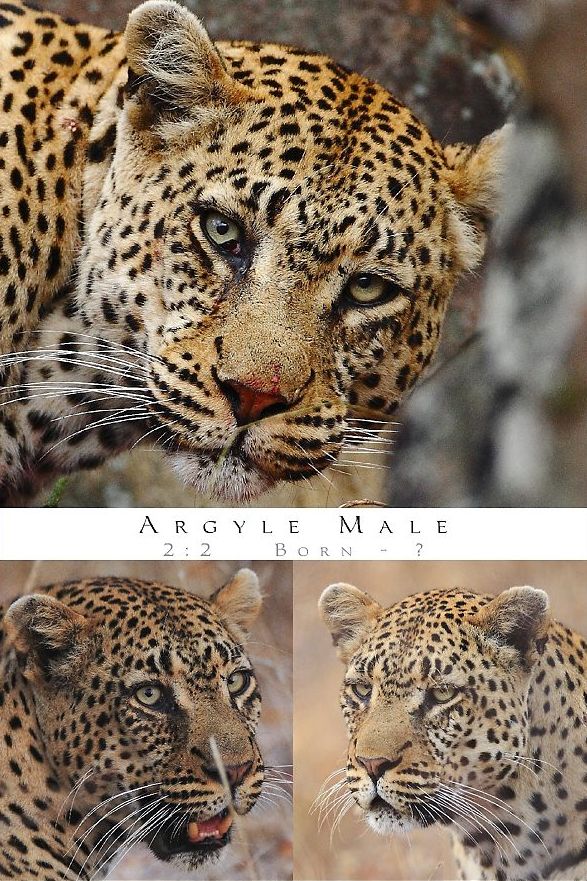 Name: Argyle Male (named after the Argyle property that makes up a big portion of his territory) 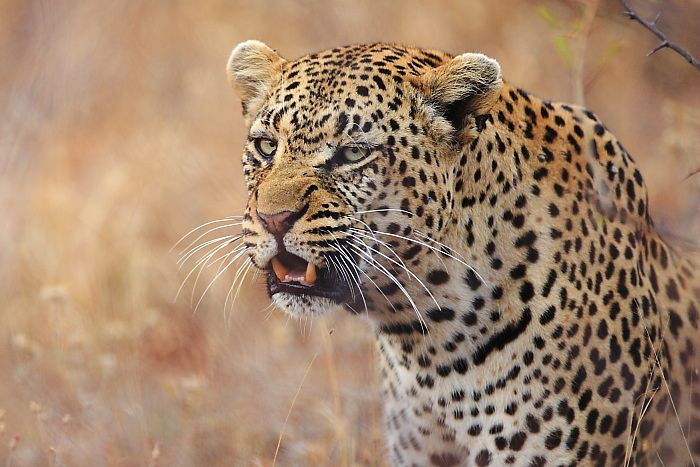 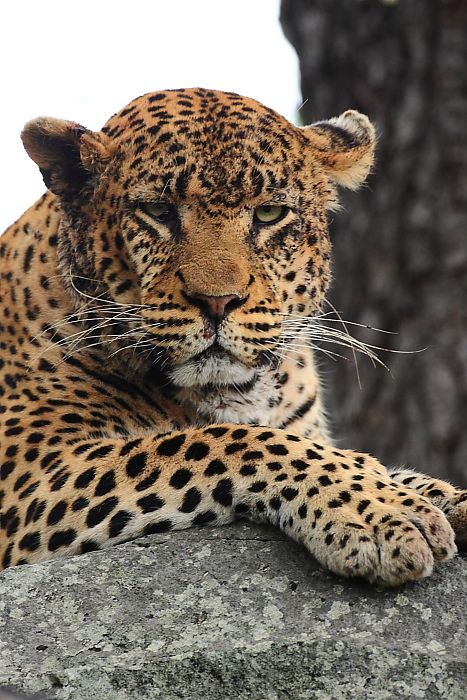 Born: Approximately 2002
Territory: Northern section of the reserve, especially around Motswari, and extending further north into the neighbouring reserve. The southern half of his territory falls within Motswari’s traversing area, specifically the properties of Argyle (hence his name), Motswari and Peru. The southern boundary of his territory seems to be around Woza-woza Cutline, and he is seldom seen south of this. To the east, he doesn’t extend much further east of Western Cutline, but is found on Karan’s and De Luca from time to time. Going northwards, his territory covers all of Ingwelala (a neighbouring shareblock), as well as a portion of Ntsiri (another shareblock). In the west, he occasionally crosses over Argyle Rd, but his territory doesn’t extend much further west than that. He concentrates his activities mostly between the Nhlaralumi and Sohebele riverbeds, and the wedge made by these two drainage systems seems to make up the core of his territory.
Females: Argyle male mates with two known females; Argyle Jnr female, and Mbali female. It is probable that he mates with other females further north and in the north-west, such as the Sibon female that doesn’t venture onto Motswari.
Cubs: Argyle male is the father of:
2010 – Two cubs from Argyle Jnr (yet to be named);
2009 – Shongile female, Vyeboom Dam male, Shongile’s brother (2:1 male) from Argyle Jnr;
2007 – Kuhanya female from Mbali female;
2006 – Two cubs from Argyle Jnr (Ingwelala male and possibly Voel Dam female).
Mother: Some guides suspect that Argyle male’s mother might be the legendary Argyle female that used to be one of the most relaxed leopards on the reserve until she was killed by hyenas in 2005.
Father: Unknown
Siblings: Unknown

Neighbours: The legendary Mangadjane male used to be the southern neighbour of Argyle male, and the two shared several encounters; the last suspected one left Mangadjane male severely beaten and limping for a couple of months afterwards. Following this suspected altercation, Mangadjane moved much further south, and didn’t venture into the northern part of his territory again. Following the demise of Mangadjane, the southern section has yet to receive a stable dominant male, but two contenders are in place – the Machaton male, and the Peru male (Goya Rd male). A leopard known as Ntambo male is territorial in the east, but he is seldom seen and little is known of this male. Currently Argyle male is sharing his territory with his two independent sons born in 2008, but as they mature he will no doubt evict them. 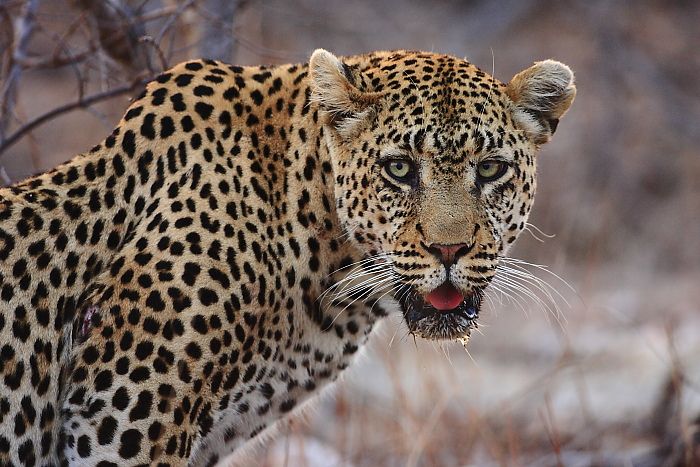 Story: The Argyle male leopard has been around for a while, and has been seen since 2005, but he was always a slightly nervous male, and wouldn’t allow the vehicles to approach too closely before he moved off. Sightings of him were infrequent, and he would be seen maybe only a dozen times a year, although his tracks were found around the lodge more frequently. It was only in 2009 that he really started becoming a prominent figure at Motswari. It started when he was found with an impala kill on Karan’s one morning, and although he wasn’t too pleased at our presence there (he snarled and growled a lot back then!), after three days with vehicle contact he became a bit more relaxed with the vehicles. A day later, Mangadjane was tragically killed, and suddenly there was a large, unoccupied territory to the south of Argyle male as well as a couple of females that went with it. It didn’t take long before this extremely large male started pushing further south, almost fully encompassing Mbali female’s territory within his own (although he had mated with he before to sire Kuhanya female). Over the latter half of 2009, Argyle male was staring to be seen at least a couple of times a week, and slowly became more habituated with the vehicles, but when walking through the bush, would often walk in areas that we couldn’t follow, and seldom walked straight past where the Land Rover was parked. 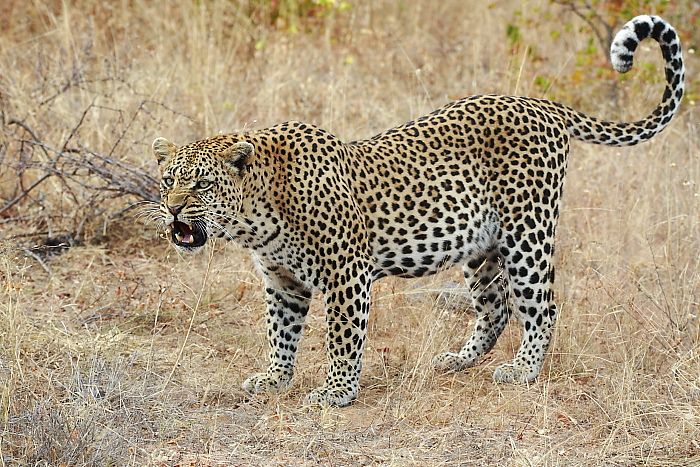 As 2010 pushed on, the sightings of this leopard became more and more common, and his demeanour changed so much that it is now hard to believe that he was ever concerned with vehicles! He will now casually stroll within a couple of metres of a parked Land Rover, and not even give it a second glance. As a result, this leopard now provides quality viewing whenever he is found, especially as he is the most relaxed mature male leopard in the northern Timbavati, and probably the biggest one too. 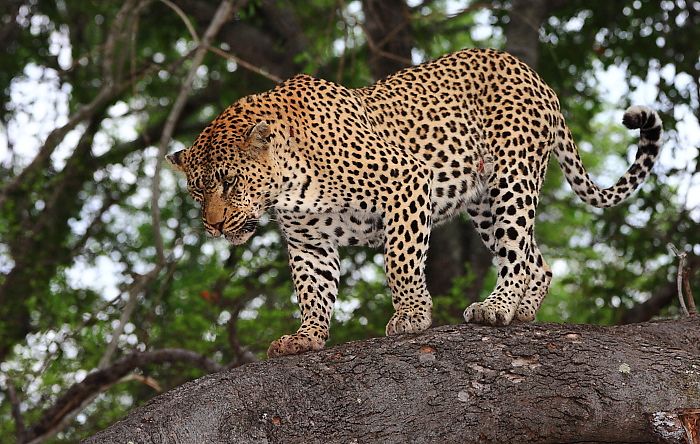 He is a very good hunter, and like most male leopards specialises in impalas, but catches an assortment of prey species. He has twice been found with young zebras hung up marula trees and he also seems to enjoy his warthogs; Grant had an amazing sighting of him just 100m from camp one lunch time playing tug-of-war with a large hyena, just instead of a rope it was a large warthog that was being pulled apart! The largest kill he has been recorded with was a fully grown female kudu that he actually killed one night in the middle of camp right against one of the bungalows, giving the guests an amazing experience to say the least! The night watchman regularly reports seeing this unmistakable leopard wandering through the camp at night. 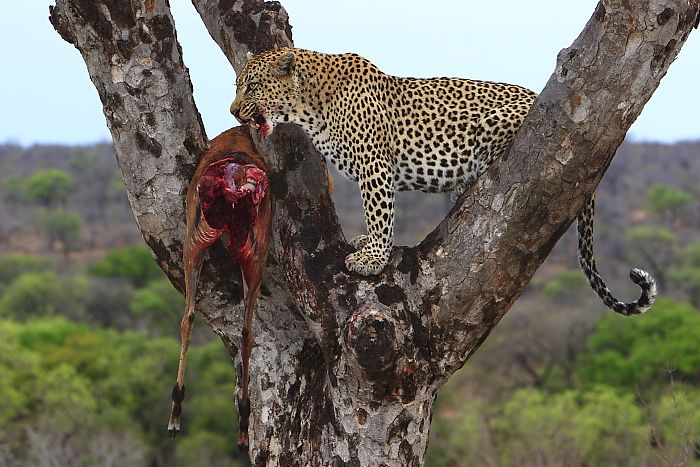 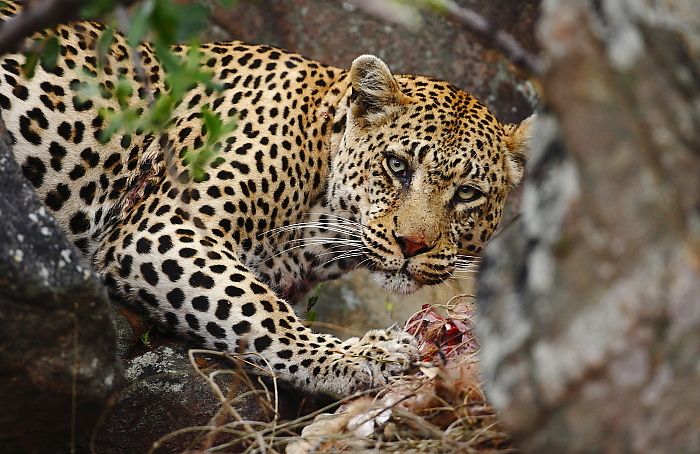 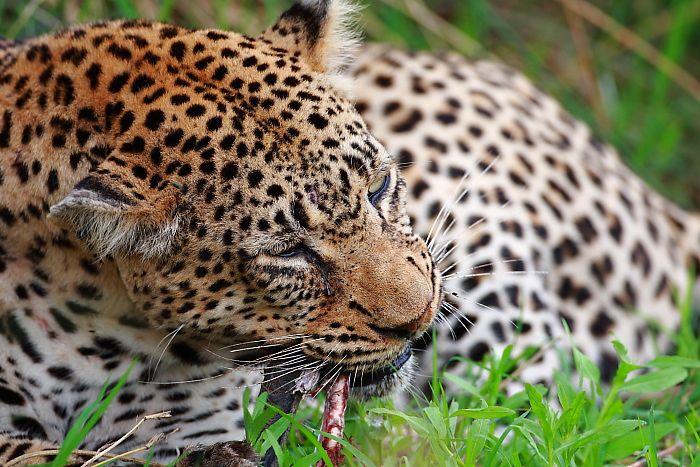 He also seems to be a good father, which is strange to say for a leopard as male leopards seldom have anything to do with their cubs, but he was seen in the company of Argyle Jnr and her three sub-adult cubs on more than one occasion. In addition, he often tolerated his offspring to feed on his kills, even when they were independent! Of course, on other occasions he has been found chasing off his females and cubs from their own kills; he wouldn’t be a good male if he didn’t score a free meal every so often! He also indirectly protects his cubs by keeping neighbouring males out of his territory, and being a large male in his prime, we can expect him to keep this piece of land for the next few years.
Interesting News:
at 20:57